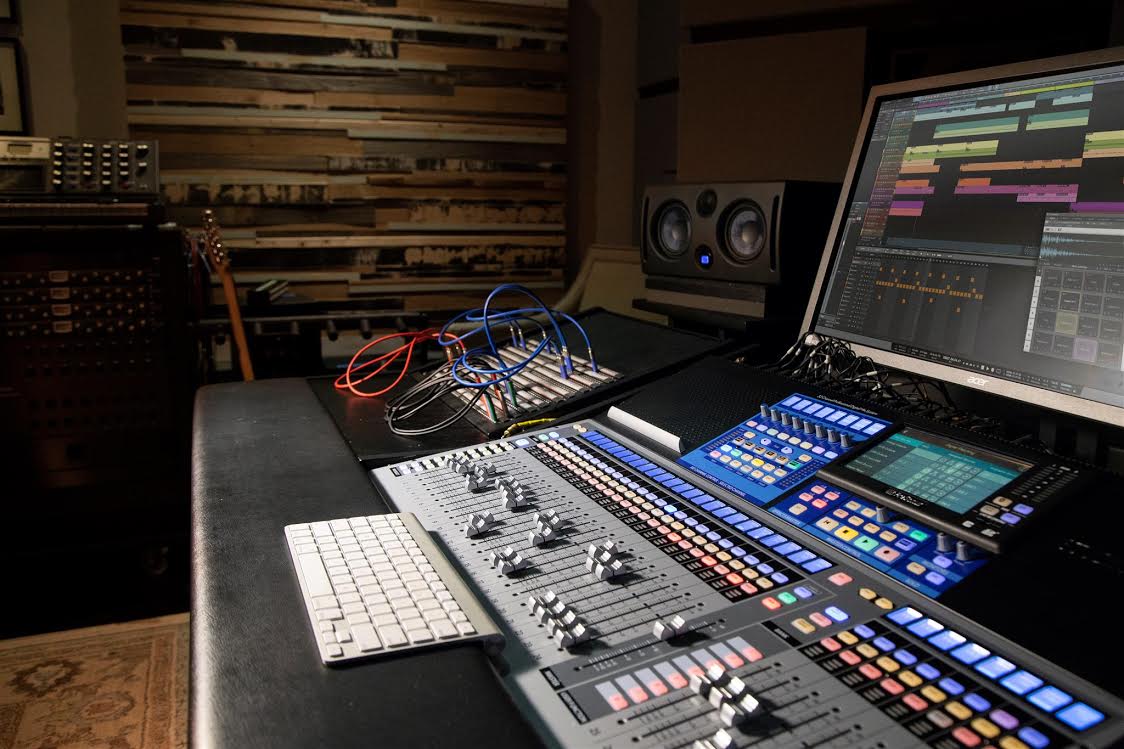 When creating a home recording studio, there are many options available to the modern enthusiast. From basic audio interfaces to small format digital consoles and everything in between, selecting the right device for your needs and budget can be daunting. PreSonus has put together this guide to help you narrow the choice. This article focuses on the benefits of using a digital mixer in your home studio; additional information on creating a home recording studio using audio interfaces is available here.

More than an Audio Interface

Digital mixing consoles provide several unique benefits when used as home recording solutions including a large complement of onboard mic preamps, outboard digital signal processing, and advanced mixing capacities that can simplify the recording process. Some digital mixers, like StudioLive Series III consoles, also provide DAW control modes that allow you to use them as a control surface for your DAW in addition to providing an excellent front-end. 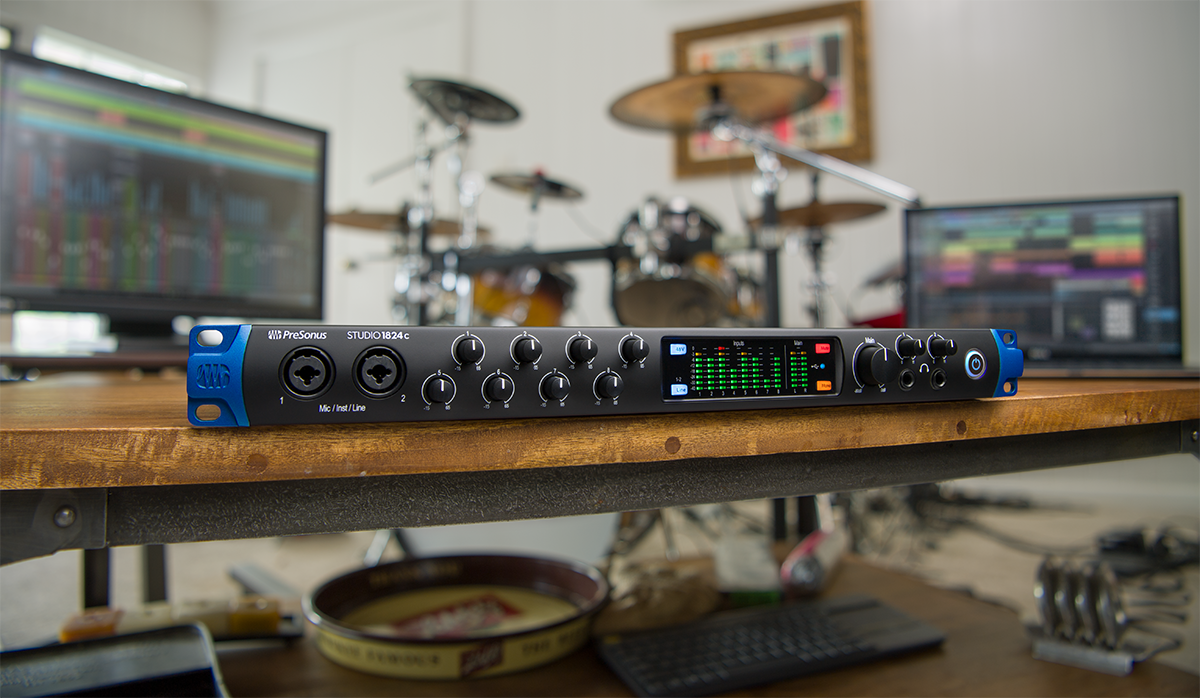 This is where the StudioLive Series III mixers are unique. Each StudioLive Series III digital mixer is equipped with a full 64x64 USB audio interface. This means you can capture every input channel, include the aux and tape inputs, plus any or every mix bus you like, opening up a new level of recording capability, and putting the power of a large format mixing desk into an affordable, compact chassis.

The next consideration is to decide how many simultaneous inputs you require and whether you’ll need mic preamps, line inputs or both. Recording a full band requires a minimum of 16 mic preamps and there are many stand-alone audio interfaces that can provide them. For example, the PreSonus Studio 1824c USB-C™ audio interface is equipped with 8 XMAX mic preamps that can be expanded to 16 by adding a preamp/converter like the DigiMax DP88. Some Thunderbolt interfaces, like the PreSonus Quantum-series audio interfaces, can even be stacked together to create massive I/O availability. Most digital mixers are equipped with a minimum of 12 mic preamps onboard. Depending on the mixer, the complement of onboard analog inputs can be expanded using an integrated digital audio network solution, analog patching to outboard preamps, digital protocols like ADAT, or some combination of all three. 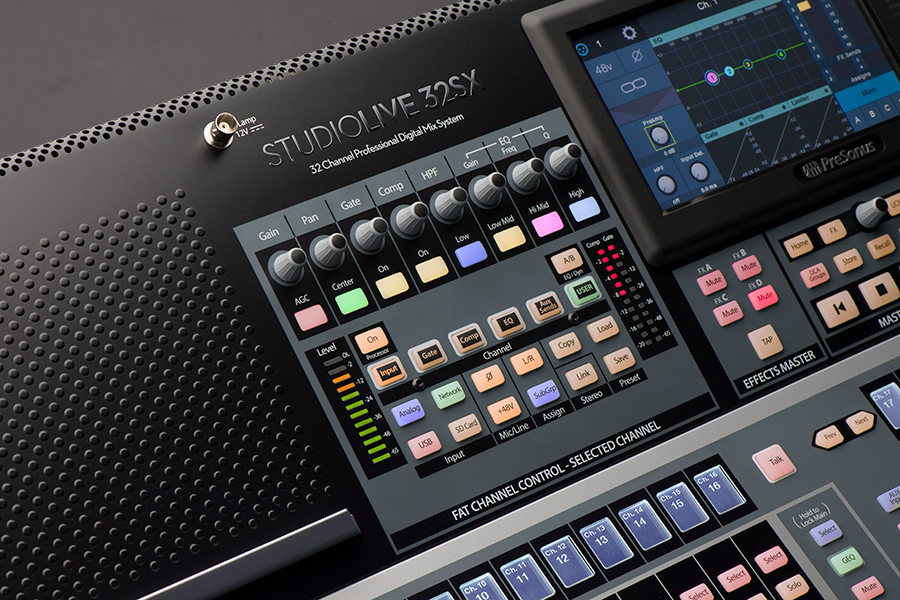 StudioLive Series III digital mixers provide up to 32 remotely controlled XMAX mic preamps onboard. Mixers that provide more channels than physical inputs, like the StudioLive 32SC can easily be expanded to 32 inputs by adding an NSB 16.8 stage box connected with a single Ethernet cable. There are several advantages to choosing a mixer with remote-controlled mic preamps. The first of which is that the preamp trims can be saved and recalled with the rest of the mix session. This greatly simplifies session recall and ensures that you can reliability repeat the same recording sound.

Unique to the StudioLive Series III digital mixers and Studio One, is the ability to save your mixer’s preamp level with your Studio One session. Because Studio One and StudioLive digital mixers were designed to remote control one another, preamp trims, phantom power, and polarity can all be set directly within Studio One as you record enable each channel and set its level. This allows you to set the input trim of your sources while looking at your recording meters, significantly reducing the risk of setting levels too high or too low.

Walk into any large recording studio and you’ll find an analog patch bay. This facilitates the fast and flexible routing audio engineers require to create the right signal flow for the sound they wish to create.

Most digital mixers provide some level of digital patching, but only StudioLive Series III digital mixers provide a true digital patch pay. Beginning with the Input Source menu, StudioLive Series III digital mixers allow you patch any input source to any channel. This means that you can select any analog input, network stream, SD playback track, or USB Return to route to any channel you like. This provides unique processing and routing flexibility. Let’s take a look at one common studio application:

You often find “mult” splits in the analog patch bay of a professional studio. These mults allow you to patch a single audio source to multiple destinations simultaneously. Known as ‘parallel processing,’ this technique is used to process the same source two different ways and then blend them into a new and improved sound.

To begin, patch your kick drum to two channels. For our example, we’ll patch the kick drum mic connected to Analog Input 1 on a StudioLive 32SC to both Channels 1 and 2.

By default, Analog Input 1 is already patched to Channel 1, so all you’ll need to do is patch it to Channel 2. 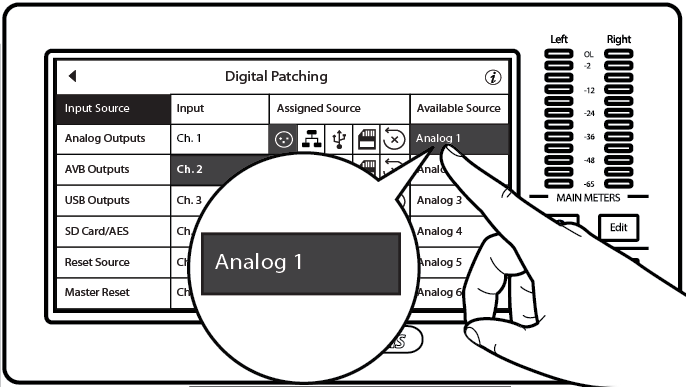 A popular parallel processing method is to process one channel for sustain and big bottom end and the other for attack and punch.

On Channel 1, dial in a slow attack on the compressor with a fast release. This will allow the initial transient to remain uncompressed, emphasizing the kick drum attack so that it can punch through the mix. This will squash the low-frequency resonance of the kick drum and make it sound thinner and weaker than one generally wants from a kick drum. But that’s okay; we’re going to get that back in a minute. Use your noise gate and EQ to focus on the frequency range of that initial attack to make it as tight as possible.

On Channel 2, use a fast attack on your compressor and adjust the release to taste. This will increase the fullness of the kick ​drum but soften the attack. Use your EQ to enhance the low end.

Now, mix the two channels together, blending the punchy attack on Channel 1 with the fat low-end on Channel 2, creating the perfect kick drum sound.

Best of all, because StudioLive Series III digital mixers provide 64 simultaneous recording channels, you can record both processed signals and the unprocessed signal for maximum flexibility all thanks to the powerful Digital Patching options onboard these mixers.

Modern digital mixers are equipped with a plethora of processing options. As any professional engineer will tell you, having an assortment of noise gates, expanders, compressors, and EQs at your disposal is the secret to creating amazing recordings. Most digital mixers provide limited plug-in models that can be inserted on several channels at once.

StudioLive Series III digital mixers take this one step further and provide state-space modeled compressor and EQ plug-ins on every input and output bus. This not only allows you to process each channel individually, but it provides the ability to do some creative bus processing as well. For those not ready to commit channel and bus processing to their recordings, Studio One delivers the flexibility to use the same plug-in models on your computer instead. What’s more, the StudioLive Fat Channel processors can be controlled and recalled from Studio One and vice versa, making your mixer a seamless part of your DAW recording environment.

It’s never been easier or more cost effective to create professional recordings on any budget. However, mixing with a mouse has its advantages and disadvantages. This has led many engineers to utilize high-quality DAW control surfaces like the award-winning PreSonus FaderPort-series. DAW Controllers provide tactile controls for transport, fader levels, panning, plug-in parameters and much more. 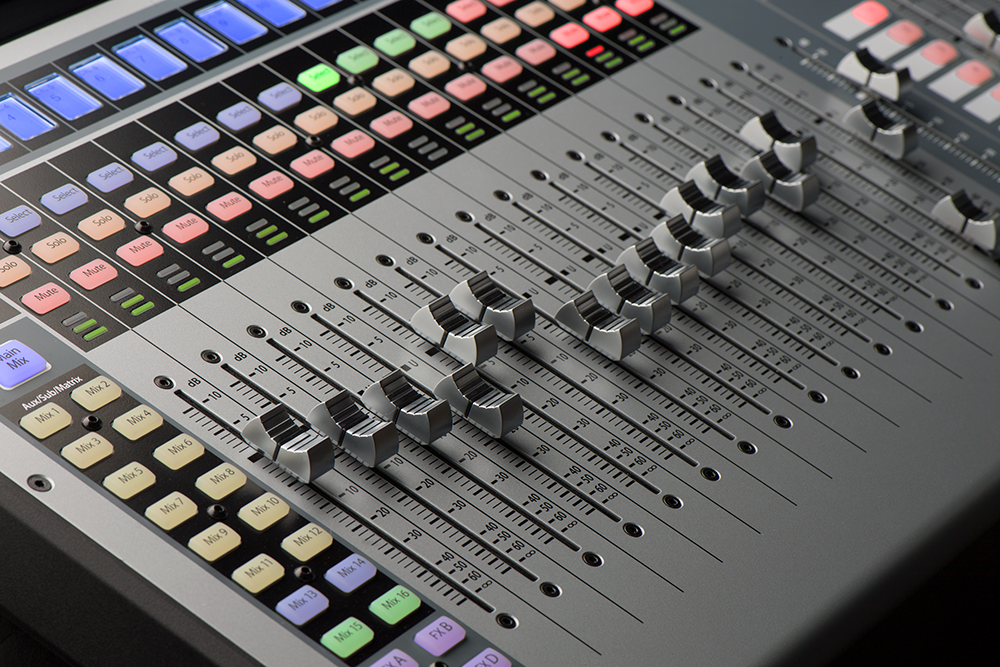 With onboard recording features, powerful processors, dozens of high-quality mic preamps and more, StudioLive Series III digital mixers are a fantastic solution for any sized recording studio. As an integrated solution, they provide a cost-effective, space-saving option combining all the analog I/O you need with the high-quality converters, state space modeled plug-ins, digital patching, and DAW control you want for professional recording results.